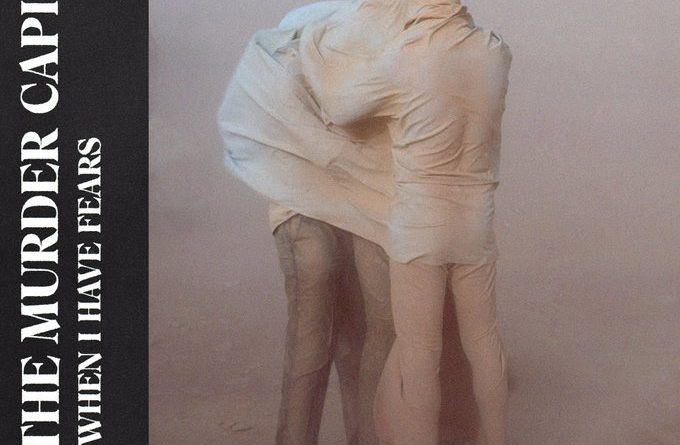 While the heatwave was striking Paris, we had the chance to meet with James McGovern, singer of The Murder Capital in the garden of a record label in Paris. Their first album “When I have Fears” will be out on August 16th via Human Season Records.

Chairyoursound: Could you start by introducing the band for the readers who might not know you?

James : Our band is The Murder Capital and I am James McGovern the singer, Damian Tuit and Cathal Roper are the guitarists, Gabriel Paschal Blake the bassist and Diarmuid Brennan the drummer.

Chairyoursound: You are releasing your debut album “When I Have Fears” mid august but you already played a show at La Boule Noire in Paris early this year, how was the show?

James: It was incredible man, such an accepting, open crowd! I guess Paris is an inspirational home for us. I spend a lot of time here and I adore it. It’s easy to romanticize Paris of course but there was something really special and unique about that show!

Chairyoursound: You are also playing Rock En Seine festival at the end of August, how do you feel about festival shows compared to headline ones?

James: It’s a total different thing, it’s nice to see that many people in the crowd just turn up to see your show. I love that it’s very freeing, it’s a different feeling and I can’t wait to play at this festival!

Chairyoursound: About “When I Have Fears”, how did the album was conceived?

James: The original drummer and bassist left the band. I know Gabriel through partying and I met Dairmuid through Tom from Fountains who are good friends. And we just started writing songs together. It came together very quickly! It started to become a record after two or three tracks were recorded and after we found the record title from the poem “When I Have Fears” by John Keats. The whole sound became a point of reflection for us both as people and as writers. We started writing and came in contact with Flood . He was so enthusiastic about working with us that we couldn’t really say no! He was so persistant in the nicest way possible. Everything except from “More Is Less” has been written between July and January.

Chairyoursound: Working this that producer might have been a big thing for you as a band cause he worked with big names such as Foals?

James: Yeah! I mean like New Order, Sigur Ros, Nick Cave…. that back catalogue was in itself really amazing but it was really just the emotion he gave off and the sort of embers that eminnated from like the sort of flame of his life. He has such a great way of communicating with you, making you feel understood. His empathy and the way he communicates with people enables you to explore your artistery more further than you thought you could maybe and in different ways. He’s been a bit of a glue for the band. We also had a team in the studio that was totally integral to us and our experience and made the record what it was. The songs were like born in Dublin and clothed in London.

Chairyoursound: Did writing where you live and recording in London brought different vibes to the songs?

James: Absolutely! It’s like you get a whole new environment that shades a new light upon everything and makes it clearer and you can look at it from a different perspective. Then you can make necessary adjustments and yes it really came to life in London.

Chairyoursound: And lyrically what would you want the listener to take from the album?

James: I don’t know, a lot of these songs are poems I’ve written like mainly from personal experience. Because for us it’s all about authenticity, not by creating something that has never been heard before but by staying true to ourselves and making a record about us as we are now, our experiences. Some of us experienced heavy grief during the making of the record and that influenced it heavily. Albums that I love are more than that, they are like a place you like to go to visit. If anyone can experience that from our record that would be amazing!

Chairyoursound: Did you record the album live cause it feels that way?

Yeah it was recorded live. Our live shows are like the DNA of the band so it would have been like a dishonor not to record it that way. It was an amazing experience. Then we overdubed some guitars and voices in some places. We weren’t afraid to do that cause if it demanded some specific additions or changes or different spotlights we did it. We had a lot of freedom inside the studio.

Because the album is a reflection of our humanity, maybe something that’s universal as well. It’s important that the record it’s in itself a leaving, breathing thing.

Chairyoursound: Your songs are poems with music, do you write those poems to become songs or sometimes they just stay as they are?

James: It cames naturally as poetry when I’m writing it even in my journal. Then, a lot of times we are writing songs together and I flick through what has been written to find the best text to go with the music. It happens quite naturally. And sometimes we write music and words are being written after. We’re quite free in our creativity and want to keep the writing exciting for ourselves.

Chairyoursound: I felt listening to the album that you put a lot of thought into the tracklist order..

Chairyoursound: Was the two-part song of the album written like that or was the splitting made afterwards?

James: The idea came on a writing trip. Part I was written and part II a couple hours later and then we realised it was one song! We splitted it because you can visit them individually but it’s one piece and having the cello at the end of it brings a different texture to the instrumentation and makes it evolve into part II.

Chairyoursound: How does that tack order reflects in your shows?

It’s just like if you go to see movie or read a book or go to a show you want an ebb and a flow to it, for us that’s just the way we do it, through the setlist we want to give people something like a story.

Chairyoursound: After the album release you’re doing a massive french tour inside the European one, how did that came about?

James: After La Boule Noire went so well ou agent Matt who is an integral part of ou team booked it. We’re just lucky that was the best decision for us cause we love France so much already. After Rock en Seine and Le Nouveau Casino we will plays cities like Angers, Toulouse. Those shows give us the opportunity to try going to the heart of the country much faster.

Chairyoursound: What do you want to tell people about the band, the album?

James: For us it’s so cool that people can hear the album, it like a release for us. And we can’t wait to play a lot of shows in France cause the country has already been so welcoming. The album represents where we are now as a band and in our lives and hopefully people will relate to the songs and share emotions with us.

Chairyoursound: Thanks a lot for your answers and we hope to see a show of yours very soon!

A huge thank you to James for his answers and being so welcoming and thanks a lot to HIM Media for the interview opportunity and to Warner Music France for sharing their magnificent garden with us.