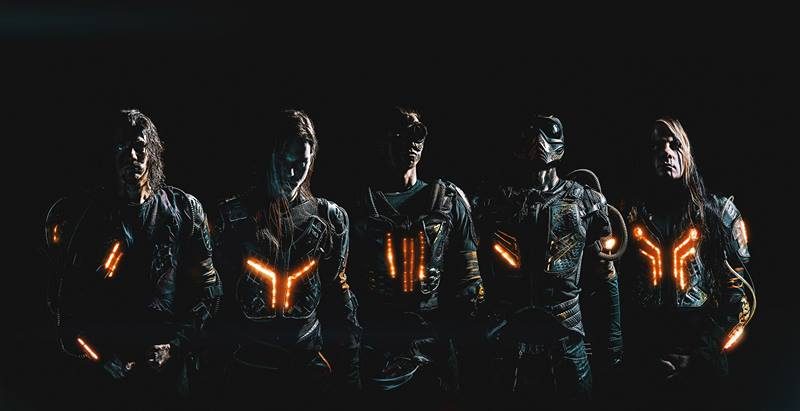 This year at Hellfest, I was able to spend a few minutes with Dominic from the German band Cypecore and we spent a little time talking about the future plans of the band but also of the band itself:

Very nice show this saturday morning, how do you feel after performing at Hellfest? Dominic​: Good, it was one of my dream to perform here. When we first got here, it’s kinda surreal, but then it’s just amazing. The crowd… insane! They responded well to our songs, they were singing along, it was absolutely terrific! We couldn’t hope for anything better! It was spectacular!

Was it better than Motocultor?

Dominic​: Hmm I’d say yeah just because it was double more people there. We had like… six or seven thousand people there at like 11 AM and it’s absolutely insane yeah! But not necessarily better, but it was also very good yeah!

Let’s talk about the band for people that don’t know ​Cypecore​.

Dominic​: Yes, we are ​Cypecore​, Sci-Fi Metal band from Germany. Musically we are somewhere between Industrial Metal and Melodic Death Metal. We do have a sci fi concept yes.

Why did you choose a visual identity as sci-fi and post apocalyptic?

Dominic​: We went to a movie, then we went to a ​Behemoth ​show and we were like “man, this is super cool!” and when we went to the movie there was this super dramatic scene with this emotional music and we wanted this for our shows. When people see us they need to have some visual, to add to the music and then… we all like Star Wars, Sci-Fi, Mad Max… so that just went along.

What’s the link between your music and your universe?

Dominic​: That’s an interesting one (laughs)! It’s all playing in there. So I guess they’re directly connected one to another. Both lyrics and the music can fit in that universe so… it’s kind of a fictional thing but it’s connected to our because it’s in the future. So it’s not something crazy.

How do you make your costumes and why you choose those particular materials? Dominic​: We made them ourselves from basically anything we could find. We think of it: if you survive, what can we scavenge? What could we find? Just check at anything you can find just to survive. That’s the concept and we tried to make it look as authentic as possible for that scenario, so that’s how we went with, how we got them and we build them on our own and I think we look cool (laughs).

About changes inside the band, do you feel more free about performing and making music?

Dominic​: I don’t think so. Composing and writing in general has always been very free. Everybody is contributing and we faced a couple of line-up changes over the past two years, but there’s no point of time that we just stop recording or doing demos or whatever. If anybody brings an idea, some go into a song, some don’t… It’s very relax, very free, we don’t force anything.

At the beginning you were more inspired by Swedish Melodic Death Metal and now it seems like your sounds are deeper, longer and even bring atmospheres. What are your influences on this?

Dominic​: I am. I joined the band as the new vocalist. The third record ​Identity​ has been recorded with the old vocalist and I contributed in writing the last album so I guess I am. The axe factory wielding. But maybe not, who knows? The band grows, I mean all bands do.

Did you already think about your fifth album?

Dominic​: Yes we do! We actually started writing material earlier this year, so I think demo phase will be done at the end of august when we play our last festival show and then we can focus on writing new material for winter and perhaps release next year. But that’s not carved in stone so… we will see how that goes but that’s the plan yes!

On your future tours, do you think there will be french gigs?

Dominic​: I would love to play in France, France have been very kind to us! It’s just hard to get to France when you’re a band from Germany who doesn’t work with a label so… if you’re a french promoter and you would like to see ​Cypecore ​playing, just hit us up! We’ll be there and play for sure!

Last question, do you have a message for your french fans?

Dominic​: Stay truly! You guys have been very cool, and we appreciate coming to you, playing for you and hanging with you guys! Thank you for being excellent hosts and yeah, thank you for your hospitality! Thank you!